In the last year, Bitcoin has started to become a somewhat popular thing to write about in the general media. It is interesting to peruse the mainstream media in order to find useful information about what is happening in the Bitcoin economy. Of course, if you want solid information, you can visit CoinDesk, Bitcoin Magazine, or Bitcoin Warrior, but it is also fun to see what other sites are saying. 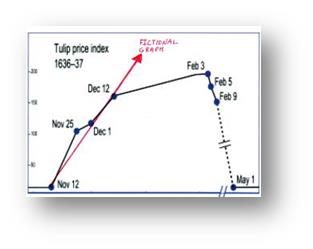 What is most notable is that the journalists and experts often enough seem to have little idea of the subject they are writing about. In just a few minutes I was able to find these little nuggets:

At the end of last year, the Winklevoss Twins posted on Reddit that they see one bitcoin eventually being worth $40,000. At the time, many scoffed at the prediction, but with so many tech enthusiasts clamoring at the idea of bitcoin competing against the likes of Visa and PayPal, it might be in the realm of possibility.

“Small bull case scenario for Bitcoin is a 400 billion USD dollar market cap, so 40,000 USD a coin, but I believe it could be much larger. When this will happen, if it happens, I don’t know, but if it happens, it will probably happen much faster than anyone imagines,” wrote Cameron Winklevoss.

Yet again, there were high hopes for tulips too, according to Peter Schiff, president of Euro Pacific Capital: “A bubble is a bubble. And there’s a bubble in bitcoins.”

Yes, it is certainly popular to compare what is happening with Bitcoin to the Dutch tulip craze. On the surface, there may even seem to be some similarities. Tulips, newly introduced to Holland, became widely popular, fueling demand that caused a price spike. The spike caused more people to pile in, driving prices up even more, until, according to Wikipedia, one tulip bulb was worth more than 10 times a craftsman’s annual salary.

With Bitcoin, a new technology allows people to exchange value across an open, trustless decentralized network, eliminating the need for many of the functions of banks and other financial middlemen. People can keep, send, and receive bitcoins electronically for a mere fraction of the cost of credit cards, banks and other institutions. A level of anonymity is built in, which has been lost with most other electronic transfers. And, the protocol supports the development of a myriad other applications, most of which are yet to be developed, including smart contracts (automatically executed contracts on proof of fulfillment), proof-of existence (notary function), micro-payments (great for publishers, businesses, and artists of all stripes), etc. And, it will allow for a truly global economy since a person in Zambia will be able to do business with a person in Japan with no worries about cross border payments, currency valuations, etc.

So, on the surface, Bitcoin is new, and as more people adopt, its price will rise. On that level, Bitcoin is just like the Dutch Tulip Craze. Scratch that surface, and … not so much.

What’s the key to the perfect pump-and-dump Ponzi scheme? Plausibility and prey.

OK, it’s a short quote. What I really love about Trugman’s derisive tone when talking about Bitcoin is his complete lack of knowledge the meaning of the terms he uses. A Ponzi scheme is one in which a central individual invites people to invest with promises of great rewards. This person will frequently give returns to first investors to get a buzz going and get more people involved. Eventually, the number of investors coming in cannot reimburse those who had already bought in and the whole structure collapses.

Bitcoin has a lot similarities to a stock or commodity. Those who buy in are not guaranteed a return, but are betting that they will get one based on what they know about what they are buying. For this reason, it is important for people to do their due diligence and know that they are getting into before they start using Bitcoin, but that is no different than buying any stock, bond, or commodity. Bitcoin would be closer to a tulip than a Ponzi scheme, but that difference seems to elude Trugman, an expert in his field.

In fact, I think that Trugman knows what a Ponzi scheme is. What he is doing is even worse than not being informed, he is using a term he knows will scare people against a technological he fears with the same fervor as he fears kids on his lawn. Yelling ‘Ponzi’ is easier than actually having to do any work and to communicate something complicated to his readers.