What to Do Now That Mt. Gox Has Bitten the Dust

Mt. Gox has bitten the dust. There are likely to plenty of tears, but none for the fallen Bitcoin behemoth that looked set to dominate the future of Bitcoin not all that long ago, but through staggering incompetence lost it 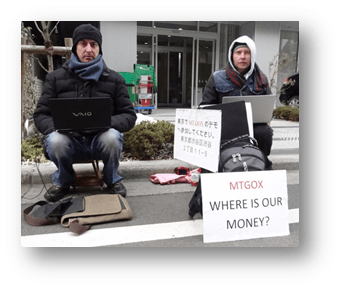 all, along with thousands of investors’ money. It’s those folks who will shed the real tears for the hopes and dreams buried under the Gox carcass.

The short history is that Mt. Gox began life as a site where fans of a role playing game, Magic: The Gathering, could exchange cards. The owner at the time became interested in a new online money, Bitcoin, and began trading that. Soon, that portion of his business eclipsed the trading card business and the first Bitcoin exchange was born. As the only real exchange on the scene for years, Mt. Gox was dominant through the beginning of 2013. Then, in the spring of that year, the troubles began. First, just when Bitcoin was gaining in popularity, the trading volume overwhelmed Mt. Gox’s system and they needed to shut down trading in order to catch up.

That event in-and-of itself should have been a wakeup call to the Mark Karpeles, a Frenchman living in Japan who bought Mt. Gox from the original owner. At that time, awash in new business, a very profitable business model, and in a field of incredibly talented and forward thinking people, it should have been possible for Gox to see the writing on the wall and know that they had to drastically step up their game. Rather, they made misstep after misstep. The site was hacked losing many customers’ login information, they failed to check a box on a bank application stating that they would be involved in money transmitting, a detail that caused the bank account to be seized by the US government. After this, Gox had no ability to deal directly in dollars.

Gox was losing market share by the summer, and had removed the ’80%’ sign on their front page since they could no longer boast anywhere near that percent of the Bitcoin exchange business. Due to what they claimed were banking problems, withdrawals of fiat were very slow. This created a kind of ‘walled garden’ effect. People could move Bitcoin on and off the exchange, but were unable to easily get cash off. This drove the price of Bitcoin up and for months the price on Gox tracked a hundred dollars above the other exchanges.

Then, in the last few weeks, Mt. Gox announced that a problem in the protocol had been discovered that needed to be fixed by the core developers. Others in the Bitcoin community were quick to point out that they flaw they discovered had been known about for years and that other Bitcoin businesses had configured their software in such a way that the ‘bug’ didn’t matter. The problem is that when a Bitcoin transaction is made it is accompanied by a number that tags it for easy tracking. This number, however, can be changed without invalidating the transaction. All of the key information is the same: sender, receiver, amount. When a hacker sees a transaction happen, he can copy the data from the original and reissue with a slightly different tracking number. If the hacker’s version of the transaction gets confirmed in a block, the sender has still sent the money and the receiver still gets it.

The problem occurs when a business only uses that tracking number to confirm that a transaction has been successful. With Bitcoin, it’s possible to look at the blockchain itself for the details of the transaction and see if it’s there. Mt. Gox didn’t do that. Rather, they just checked for the tracking number which meant that the hacker could then claim that they hadn’t received the money and Mt. Gox would send the payment again. Worse, Mt. Gox had an automated system that checked for the tracking number and automatically sent another payment if it didn’t appear.

Despite getting lambasted by the Bitcoin community as ‘amateur hour,’ for a time it seemed like Mt. Gox was going to stage another comeback. They reportedly had gotten the team at Blockchain.info to help them come up with a fix for their system. Just when it seemed that they were going to get their Bitcoin withdrawals back online, they deleted their twitter account and finally their website disappeared.

At present, supposedly leaked documents reveal that Mt. Gox may have had 750,000 bitcoins stolen due to the problems with transaction malleability. These documents, a Crisis Plan, supposedly details how the company can use deflated Bitcoin prices to reduce its debt, go off-line for a month, rebrand, get new backing, and re-open, possibly in a new locale like Singapore. If the document is even real, it’s a very optimistic plan that has as its heart the assumption that a rebranded Gox would be able to get their customers back. Certainly if they reopened customers would be back, but only to withdraw their Bitcoin and try again elsewhere.

The number of bitcoins supposedly stolen from Gox is truly astounding if true. The crisis plan makes reference to this theft being one that happened a long time ago, but that went unnoticed. This would seem to jive with the fact that last summer Eric Vorhees took a look at Mt. Gox’s books and declared them solvent. Why the amount of bitcoins in cold storage wouldn’t have been checked on the blockchain, I don’t know. Why they weren’t checked regularly, I don’t know. But then, why Mark Karpeles didn’t bring in professionals to help him transform his company into the leader it arguably should have been, I don’t know. What I do know is that whatever happened, probably didn’t happen because of transaction malleability.

Ken Shirriff, a blogger who sometimes looks at what is happening with Bitcoin, did an analysis of altered transactions. What he discovered was that most altered transactions occurred after Mt. Gox’s statement highlighting the problem and apart from a few days in February, were never a significant number. Certainly nowhere near the number needed to steal 750,000 bitcoins.

The failure of Gox has already fallen with a giant thud in the media and will empower naysayers, bankers, and regulators the world over. The problems at Gox were very clearly caused by the incompetence of the management. Any attempt to revive Gox is likely to be met with gales of laughter as, even as people lament the losses, the majority of the community is rejoicing at the death of this organization that has done little but stain and put a drag on Bitcoin’s development. For the time being, though, we as a community are going to need to defend against the claims of fraud, shady dealings, and instability that will be hurled at us with new vigor.

I have every belief that Bitcoin will survive and eventually thrive as a currency, a commodity, and a new way to do business. The potential is too stupendous to be stopped by the failings of Mt. Gox, the attacks of hackers, or the onslaught of naysayers. But we need to learn from the mistakes as well.

Fortunately, this is the way things are going. There will inevitably be more hacks, scams, and scandals with Bitcoin, but that is not unique to virtual currencies. I’ll end this piece with a list of some of the bigger banking scandals of just the last year. And remember, Bernie Madoff, singlehandedly, scammed 20 billion dollars; that’s twice the peak Bitcoin capitalization.

There is much more, of course, but it’s good to keep in mind when allegations of how vulnerable and unstable Bitcoin is, that fiat doesn’t always do any better. If we keep this in mind, we can keep from getting goxed again.