The Homeless Shelter that Only Takes Bitcoin 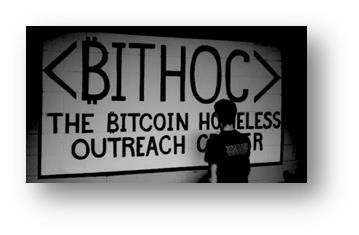 The owners of this shelter are trying to make the best of the unfavorable economic situation; with a four-time increment of the dollar value and an equally high increase in the number of transactions, these people aim to benefit from Bitcoin.

Sean’s Outpost is a home to 100 homeless people, all of whom were victims of the devastating Hurricane Ivan and arrived after it ruined the coastal city. These refugees include those who came directly from that wreck of the hurricane and also those who calculated the scope for labor in building the area, and after the work were so dried up that they had nowhere else to go.

The credit for the pro-advancement stature of this shelter goes to Jason King, the founder of Sean’s Outpost. He has always fancied new technologies and even wanted to bring aquaphonics into the shelter. He leveraged his presence in the Bitcoin forums and his best shot was to start the trend: “Feed 40 people for 1 BTC”. He was successful in securing meals for 80 people.

The owner comments on the various advantages of Bitcoins. It saved them on a lot of time. They were able to feed the people within twenty four hours, which would have been impossible with any other mode, say PayPal or a transitional merchant account. It enhanced the process and came as a saviour. Bitcoins allowed them to receive payments from all over the world, and presently they have received donations from over 23 different countries.

Sean’s Outpost has also received a large sum of Bitcoins from Butterfly Labs/Bitcoin Development Fund. The donation was used mostly for food. Jason King elaborates on the various kinds of expenses that are required to run such a place.

Jason sounded mighty optimistic about Bitcoins, in terms of crypto-currency. The advantages of immediate, worldwide-open payment system, which is controlled only by you, are too many. Despite governments getting in the way and banks despising it, crypto-currency is the thing for this generation. Jason, absolutely hopeful of its present stature predicts that Bitcoins will soon surpass and overtake all other forms of currency.

Michael Kimberl, a friend of Jason who helps him run the place agreed with what Jason thought of Bitcoins. He confesses his earlier ignorance about this child of technology and advancement. But he also confided that understanding Bitcoins- block chains, wallet, did not take him very long. He emphasizes on the economic theory that Bitcoin uses: the value of money can be raised by saving one’s money. The crypto-currency, with its no-nuisance policy and time-saving process, is definitely the second nature to the new generation.