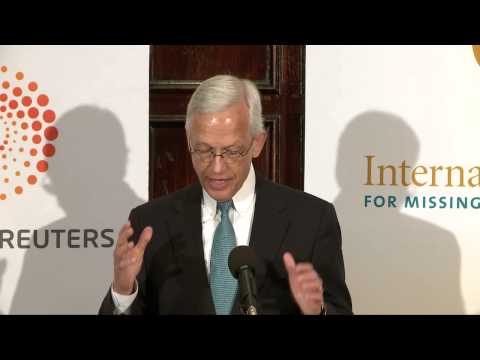 WASHINGTON, March 5, 2014 /PRNewswire/ -- The Digital Economy Task Force (DETF) – sponsored by Thomson Reuters and the International Centre for Missing & Exploited Children (ICMEC) – released its report on the emerging digital economy and recommendations for policy makers, financial institutions, law enforcement and others to encourage its growth while preventing the sexual exploitation of children and other criminal activity.

The DETF, co-chaired by Ernie Allen, President/CEO of ICMEC, and Steve Rubley, Managing Director of the Government Segment of Thomson Reuters, offers a regulatory framework that fosters the growth of the digital economy, including digital currencies and alternate payment systems, while addressing anonymizing technology and the growth of "deep web" marketplaces that allow illegal commerce, including money laundering, narcotics, weapons, stolen goods, human trafficking and sexual exploitation of children, and more. Allen, Rubley and DETF members unveiled the report at an event held at the National Press Club.

The full report is available at http://icmec.org/en_X1/ICMEC_Digital_Economy.pdf.

"The digital economy and anonymizing technology hold great promise and societal value, from offering financial tools to the world's unbanked, to protecting dissidents and journalists from unjust government reprisal," said Rubley. "But these benefits are clouded by those who use the digital economy to commit illegal acts. While these are complicated issues, we believe that a regulatory framework can grow the digital economy – and confront those who seek to exploit it for illicit purposes."

The recommendations offered by the DETF include: bolstering research into the intersection of the digital economy and illegal activities; increasing investment in law enforcement training and investigative techniques; enhancing cooperation between governmental agencies; the promotion of a national and global dialogue on policy; and more.

"The central challenge is Internet anonymity. There is an emerging 'dark web' that enables users to pay for their illegal transactions using digital currencies," said Allen. "There is a difference between privacy and anonymity. We simply cannot create an environment in which traffickers and child exploiters can operate online with no risk of being identified unless they make a mistake."

The DETF aims to educate the public and work collaboratively across stakeholder groups, including government agencies, law enforcement, corporations, academia, public and non-profit agencies, as well as key industry players. The organizations selected for their experience and expertise, include, but are not limited to:

The DETF launched in August 2013 and developed working groups to address the sweeping impact of these technologies from fostering financial inclusion to combatting illicit activities. The focus areas for these groups included safeguarding human rights, regulation, inter-agency coordination and law enforcement.

For more information about Thomson Reuters and the International Centre for Missing & Exploited Children (ICMEC), please see www.thomsonreuters.com and www.icmec.org.