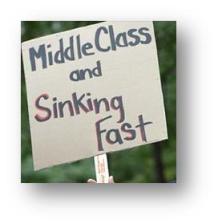 On February 5, Barrack Obama signed a farm bill further cutting food stamps for the nation’s most vulnerable. Five years ago, the nation suffered an unnecessary financial shock that sent not only the country’s, but the world’s economy reeling. If you keep your eye only on the Dow Jones and NASDAQ charts, you will think that we have recovered, but the official unemployment rate remains high, and there is broad speculation that the real rate is much higher, but people have given up looking. One wonders that when there is so much hardship, that so little help is being offered to those in trouble.


If you doubt that the middle class is in trouble, considering the following:

My parents grew up during the depression and told stories about what it was like. At that time, there was no Social Security, no Medicaid, and no food stamps. There was a tremendous amount of generosity. In those days, if someone knocked on the door asking for a bowl of soup and a cup of coffee, as long as that person was polite and respectful, my grandmother would sit that person down no matter how bare her own cupboard happened to be. On the other hand, if they couldn’t find a generous person, they had nowhere to turn.

When things get this out of whack, there is a need for some disruption to the system to put things back into balance. In the 1930s, it was a combination of the progressive policies of Franklin Roosevelt and the WW2. It’s unclear to me that the new deal broke the depression, the war certainly did that, but the policies put into place certainly created strong middle class that accounted for American growth and prosperity all through my childhood.

For the last decade I have looked for a disruptive movement that would swing the pendulum back in the political sphere, only to be disappointed time and time again. I have stopped looking in the political sphere. I have started looking at trends and movements beyond politics that will upset the carts of international corporations, billionaires in their bubbles, and bought politicians.

That disruption is going to be precipitated by Bitcoin. With Bitcoin, the locus of financial power is going to be wrest from the hands of the comfortable and returned to the afflicted. It will do it in a number of ways:

In short, Bitcoin is creating opportunities in both the short and long term. It is the wave of the future.