Open Intelligence Alert: Trust is Not Just an Algorithm 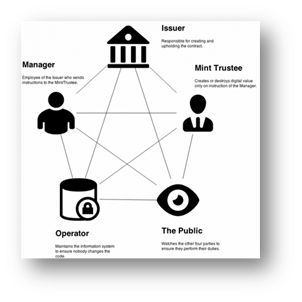 According to the source, the Mt Gox debacle was not just a software glitch, but was the result of a systemic error. The article explains how the “Five Parties Model” (consisting of the Issuer, the Trustee, the Manager, the Operator and the Public) will keep each player honest, and should be incorporated into the Block Chain Protocol. Otherwise, Bitcoin and its child currencies will have to submit to government regulation. Either way, the cost of use is liable to increase.

MtGox originally claimed that their troubles stemmed from a long-term exploit of the malleability bug which tricked exchange providers into spending bitcoins to the attacker’s account. However, the loss of 99.7% of their reserves cannot be attributed to the malleability bug. It is clear that the failure of MtGox is a failure of governance.

MtGox is not alone. Forty-five percent of Bitcoin exchanges to date have failed, in most cases with their customers’ money. The digital currency industry’s track record on fiduciary responsibility is abysmal.

In order to provide useful services, certain businesses must hold the users’ Bitcoins and cash in escrow. These businesses, such as exchanges, brokerages, online wallets, retail payment aggregators, etc. are at risk from insider theft, external hacking and loss through currency volatility risk and poor accounting practices.

To address this weakness of customer escrowed funds, back in the late 1990′s we developed a governance technique for digital currency that we called the “Five Parties Model of Governance.” (This model was built into the digital currency platform that we designed for exchange, called “Ricardo”.)

The five parties model shares the responsibility and roles for protection of value amongst five distinct parties involved in the transactions. Although originally designed to protect an entire digital currency, this technique should be broadly applied to businesses that hold value in escrow for their customers.

For a diagram, see – http://bitcoinmagazine.com/10639/five-parties-model/